Founder and Author, IT Revolution

In my day one opening remarks. I mentioned Dr. Richard Cook from the safety culture community. He gave us some pretty amazing advice on the safety panel he did in 2018. He said there are certain types of stories that you won't be able to hear on stage at a conference. Instead, you will only hear them after the sessions. Most likely at the bar after there've been a few drinks. And that's where the real lessons are told, he said, great practice comes from bad experience and experience comes from bad practice. So this struck me as profoundly important, Dr. Richard Cook even said, it's not your boss's job to do this. It's not some other agency's job to do this, nor is it your company's job. It must come from you. You must find a way to band together, find those common threads and define the moral responsibilities and activities.

Otherwise, we will be viewed forever as just a bunch of technicians, and that would be a very great loss. So this struck me as profoundly important, because the only way you got to hear that story is if you were with the right people at the right time, at the right place. So we wanted to figure out how to bring these stories that you might hear at the bar over drinks here on stage. And that is why we created the DevOps confession format. We collect stories that we've anonymized and share them with you. So the stories I'm going to share with you today were actually ones that I read at DevOps enterprise Las Vegas in 2018, because I've always wanted to record them. All right. So here's the first story. Several years ago at my company, a position opened up that I really wanted, it would have been a promotion.

I thought I had done everything right, including lining up all the support of all the other leaders I thought were politically important. And all of them thought I would be perfect for that job, given my experience and skills and track record. So I was crushed when not only did I not get the job, but the reasons they gave seems so off base, I texted a friend of mine and the text read. I was just told that didn't get the job. They told me that I didn't qualify for these reasons, insufficient communication skills, insufficient strategy skills. They told me they wanted to invest in me. Uh, but it just seemed like pretty silly and shallow words from HR. Uh, maybe to make me feel better. And that certainly didn't work. Uh, LOL, oh, well looking forward to see who my new boss will be. Closed doors, always open up new ones, smiley face.

So here is how I was feeling. When I wrote that message. I felt like it was clearly time for me to start looking for new opportunities. Despite having been at the organization for so many years, clearly my leadership does not recognize what I can do and they're not giving me a chance to do what I passionately know is right. Although I hate the feeling of leaving the company where I could be viewed as having failed at something after all, what would my peers think? What would my friends think that probably I couldn't cut it. And that's why I jumped ship. The second feeling was that of being an imposter. In other words, maybe I'm not actually as good as I think I am. Maybe looking for another job will actually be an act of fraud. Would I be someone who is knowingly pretending to be better than I actually am after all?

If I really was as good as I thought I was, I would've gotten that promotion. Right. And those growing feelings of self doubt led me into a feeling of depression for many weeks. So it was weeks after I had found out about the news. I had texted my friend. So my friend had some interesting advice. My friend said, take the company up on their offer to get a professional coach assigned to me. I got a totally different point of view and some other helpful suggestions. This friend also told me their own story of not being promoted. Uh, actually it was worse. Uh, my friend actually got demoted. Suddenly my situation didn't seem so bad. All kidding aside. It was extremely comforting to talk to someone who went through something similar and get their perspectives. Looking back at all those correspondences and text messages with my friend from all those years ago, several things jumped out at me.

One, those interactions gave me so much energy mentally. It shifted me from a dark place to one where I started thinking about how I can take advantage of this opportunity to, I ended up taking that offer of professional coaching that was offered. And through it, I started getting some pretty incredible feedback from my colleagues, peers, my new boss and my bosses peers. I learned how some of my own behaviors were holding me back. I've always been a pretty humble person, but, and I'm very cautious not to blow my own horn. So here was the feedback from the coach when people learned about all the things that my team was doing, they were blown away, but their valid concern was how come they didn't know about all my amazing achievements until now. So I learned that my own humility and inability to blow my own horn was holding me back and also holding my entire team back.

And I got some very specific advice on how to spread awareness of what my teams are doing, all the incredible achievements that they were pulling off soon, that was being communicated across all the leadership that mattered to me. I became a far better communicator and far more fearless about telling everyone all the great things we were doing. And one of the outcomes was that we became known as the experts and increasingly being asked to help on things. And there's no better marker of success than being asked to help. So now I'm marketing what I'm doing throughout the entire company in a far more deliberate, knowing that it's good for my teams as well as for my company. So I also start to realize how important it is to have a support structure. All of our journeys are full of ups and downs and without the right help from the right friends in similar situations, I might not have gotten the help I needed.

What I came to realize is that my teams need the same level of support. I started working on making sure that my people have the tools to cope, uh, with the journey that they're on their own struggles, because they will be sure to hit bumps in the road, just like I did. So where am I now, as I write this confession, I learned that being passed over for that promotion was just a setback and maybe possibly one of the best things to happen in my career. It forced me to learn skills that are, I think are critically important for my career. In fact, I'm now teaching it to my own staff because it will help them in their own careers. And at this point I've never been more optimistic about my own career. I am working on some of the most strategic programs in the organization and maybe most important of all.

I've never had as much fun as I'm having now. In fact, people are having to compete for the ability to work with me and my teams. Not only am I doing everything that I want to do, I'm being supported by what feels like all levels of technology leadership. And I'm being asked to take on more and more teams. I know I'm helping take the company forward and that this contribution is being widely recognized. And here's another thing I have learned. I used to think that you needed a certain title to be influential, and I've learned that that is not the case. Okay. So that's the first confession. And what's been personally interesting for me is what other people hear when I read this confession to them. So here are some of, uh, people's observations, a person who didn't stick around and persevere would never have known what they missed out on because in that other universe, they got a new job and they wouldn't have pushed through and picked up all these skills that they now believe are so critical.

By the way, from my own perspective, I was cleaning out my office a couple of years ago and ran into an email that I had printed out probably 15 plus years ago. It was an email from my CEO, uh, back at tripwire, uh, who had written me saying that I wasn't contributing enough at the strategic level. And I ended up being effectively demoted. And I remember I, when I reading that, uh, I felt a twinge of pain, but then I laughed and threw it away. It was after all 15 plus years ago, I think time has shown me that, uh, he was right. Uh, even though those ideas were, I think correct. And after all those were the ideas that made it into the feast project, I've learned so much from this community about what effective influence really looks like. And I know just how much more effective I could have been back then if I had known back then what I know now, and it just doesn't matter. I hope you've gotten value out of them. And it reinforces, uh, the feeling that you are not alone. Thank you so much. 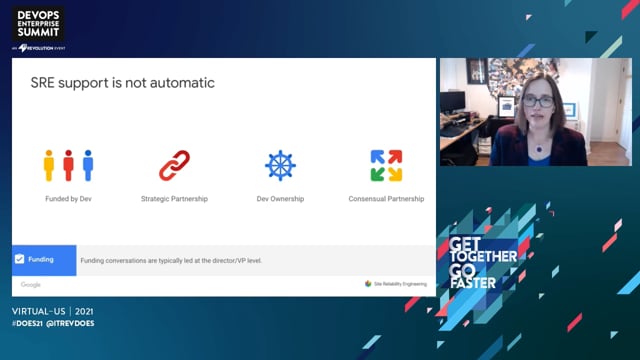 How Google SRE and Developers Work Together 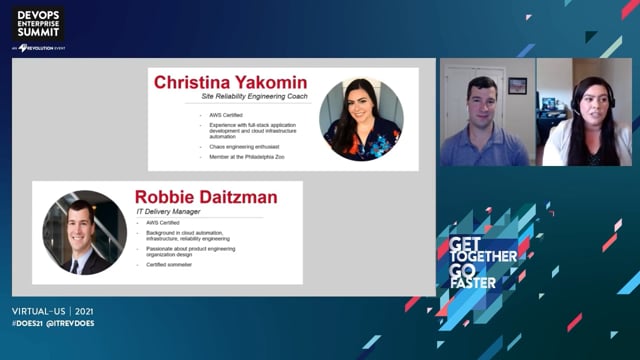 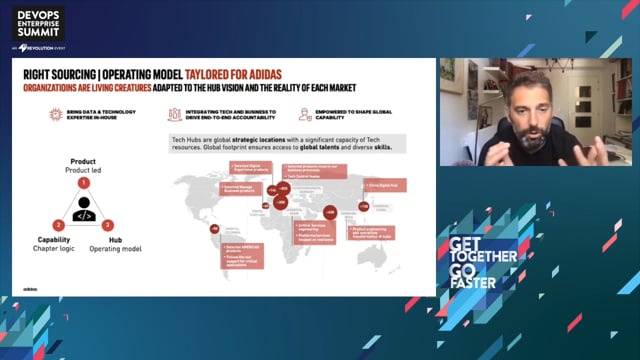